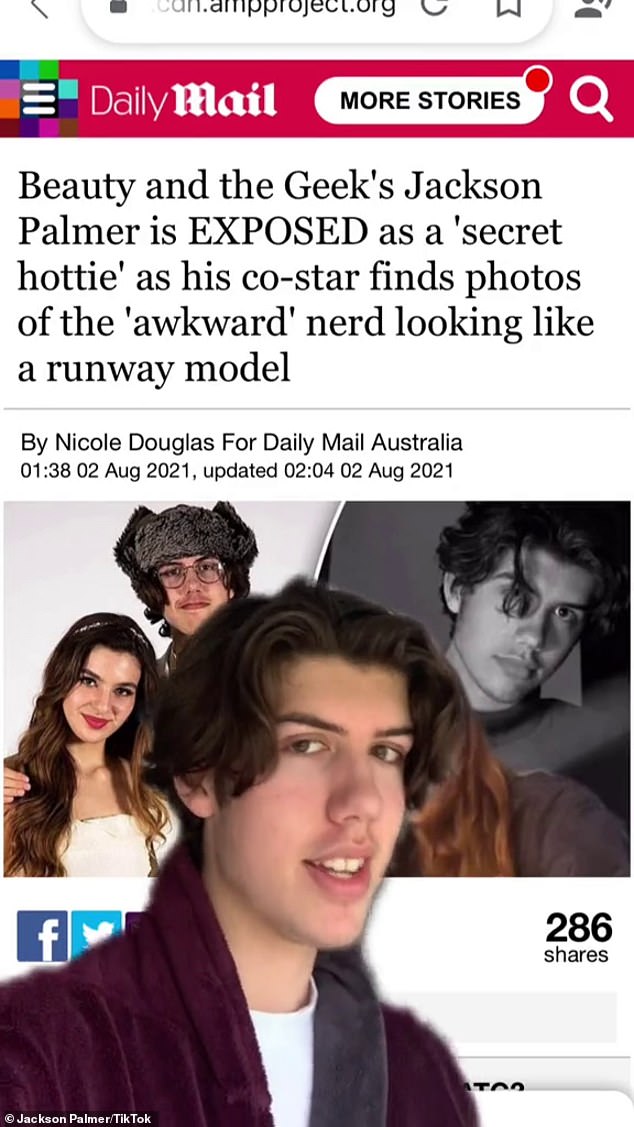 Beauty and the Geek fans were sent into a frenzy on Monday after photos emerged of self-proclaimed ‘awkward’ nerd Jackson Palmer looking more like a runway model.

And the 19-year-old reality star has now reacted to claims he was a ‘fake geek’ on the Nine reality show, in a hilarious green-screen video shared on TikTok.

Jackson spoke in front of a viral Daily Mail Australia article which included several of his smouldering modelesque images.

Reaction: Beauty and the Geek’s ‘secret hottie’ Jackson Palmer has reacted to claims he was a ‘fake geek’ on the Nine reality show, in a hilarious green-screen video shared on TikTok

‘So according to this I have an extensive modelling career. First I’ve heard about it. But whoever hired me, can you let me know so I can get some of that big dollar? Thank you,’ he joked.

Fans were quick to comment under the tongue-in-cheek video, with one writing: ‘I feel like you were a fake geek.’

‘I heard from a reliable source you might not be correct,’ Jackson hit back, to which the commenter replied: ‘But you look like The Kid Laroi?’

Geek to chic: Jackson missed out on a makeover on the Channel Nine show, but it appears he didn’t need a stylist to overhaul his entire look

Spitting image: One fan even compared Jackson to The Kid Laroi (left), which prompted him to respond: ‘Kid Laroi-looking geek.’ Pictured: the Australian rapper posing with Justin Bieber

Opinion: Fans were quick to comment under Jackson’s tongue-in-cheek TikTok video, with one writing: ‘I feel like you were a fake geek’

‘We all saw through the geek. You were a beauty all along,’ another fan added, while a third said: ‘Yeah it’s pretty obvious a few of the guys have just made their hair as s**t as possible and said, yeah nah I’m definitely a nerd…’

Jackson also shared another swoon-worthy image of himself on Monday evening, as he gazed into the distance while showing off his luscious hair and chiselled jawline.

‘Big night in the kitchen,’ he captioned the photo.

The ‘secret hottie’ claims emerged days ago when Jackson’s co-star Jessica Antoniou shared one of his smouldering photos to her own TikTok account.

‘I had the hot geek?’ Jessica captioned the video, comparing Jackson on the Channel Nine show to his modelling photos.

In the footage, Jessica looked over at a photo of Jackson on BATG wearing his trademark goofy hat, glasses and a colourful T-shirt.

Exposed: The ‘fake geek’ claims emerged days ago when Jackson’s co-star Jessica Antoniou (left) shared one of his smouldering photos to her own TikTok account

Transformation: ‘I had the hot geek?’ Jessica captioned a video on TikTok comparing Jackson on the Channel Nine show (left) to his sultry modelling photos (right)

But seconds later, the clip cut to a black-and-white image of Jackson gazing seductively at the camera, looking worlds away from his geeky on-screen persona.

Jackson, who has apparently ‘never kissed a girl’, appears to have toned down his ‘geeky’ style since filming BATG and now opts for a more demure vibe.

He shared a photo on Instagram earlier this week of himself posing by the ocean in a white T-shirt and denim jacket while sporting the same seductive gaze as before.

The photo was taken by fellow Beauty and the Geek star James Letheby, who commented: ‘Gosh that’s a great photo. That photogs got some mad skills.’

Jess and Jackson were the second couple to be sent home on Beauty and the Geek, and left before he could receive a makeover by the show’s team of stylists.

While they failed to form a romantic connection, they have maintained a ‘really good friendship’ away from the series.

Unrecognisable: Jackson shared this photo on Instagram earlier this week of himself posing by the ocean in a white T-shirt, denim jacket – and sporting the same smouldering gaze as before